In a nutshell:
A smooth, crisp and full flavoured Spanish lager from Granada's Cervezas Alhambra.

The lowdown:
This is a rich, fruity flavoured lager which has a generous maltiness, well balanced hoppines and enjoyable bitter edge. A brilliantly refreshing and full flavoured pilsner. 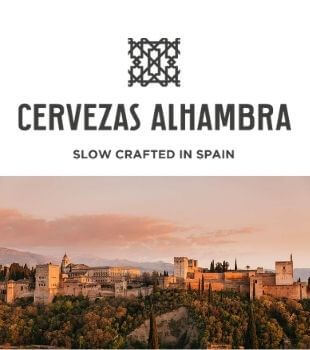 We won't be giving any prizes for guessing the whereabouts in Andalucia where this beer comes from. Established in Granada in 1925, the symbol of this brewery is the famous double lions depicted in the Patio de los Leones in the Alhambra palace. Now owned by Cervezas Alhambra, originally Andalucia's first independent brewery group, Grupo Mahou-San Miguel also have a stake in the brewery.

Interestingly, the brewery produce a red 'Abbey' style of beer which is dedicated to the city of Cordoba and a dark Negra beer. They are most famous however for their lager beers.