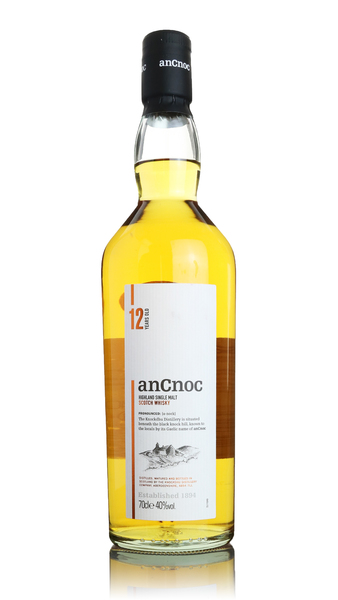 In a nutshell:
A light yet complex and aromatic Highland single malt.

The lowdown:
anCnoc 12 Year Old is a modern, lighter style of a Highland single malt. It has soft aromatic aromas with a hints of honey and lemon while on the palate there's a sweetness leading onto more fruit flavours and ending with a smooth finish.

A good example of a gentle, non-sherried style of whisky.

Situated in the small village of Knock in Banffshire the distillery was built in this location 1893 because of its good railway links and plentiful local supply of barley and peat. For a long time it was under the ownership of the Distillers Company (DCL) that became Diageo, but following closure in 1983, during the 'Whisky Loch' period of over production it was bought by Inver House Distillers, the current owner. In order to avoid confusion with the whiskies of Knockando it was decided to use the name anCnoc (meaning 'the hill') for their products. Their range is built around the 12, 18 and 24 Year Olds but they also have a growing range of non-age statements and special release vintage whiskies as well.