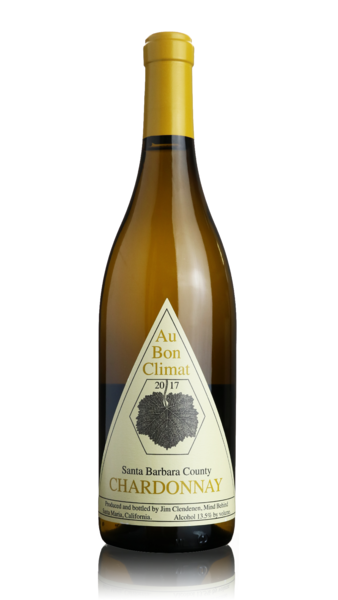 In a nutshell:
A superlative and subtle barrel fermented Californian Chardonnay.

The lowdown:
Au Bon Climat has been making Burgundy influenced Chardonnays since the 1980s always sticking to a more subtle and refined style rather than big, ripe and oaky. The 2017 is a beautiful example of their style; the flinty, stony aromas stand out while in the background is a firm spiciness from the barrel ageing. On the palate it's quite delicious with lemon and lime notes enveloped in soft vanilla.

When to drink:
A food friendly wine that will improve with age for at least ten years. Try it with shellfish, or poultry.

Founded in 1982, Au Bon Climat produces internationally recognized Pinot Noir and Chardonnay from grapes grown in California's Santa Barbara County and have their tasting room and offices based in the heart of the town itself which is about an hour's drive west along the coast from Los Angeles.

The winery is located at the foot of one of California's most highly rated vineyards, Bien Nacido in the Santa Maria Valley, one of the finest sites in California, ideal for the production of the refined, Burgundian style of Chardonnay and Pinot Noir to which Jim so aspires. ABC, as it is more commonly referred to, has won universal acclaim for its wines thanks to owner and winemaker Jim 'Wild Boy' Clendenen. Jim regards Burgundy as the benchmark to which he should aspire. He purchases clones of Pinot Noir from Burgundy in a bid to replicate as closely as possible the restraint and finesse of the wines from the region.

Jim eschewed a career in law for the lure of the vine following a month's stay in Burgundy and Champagne when he was 21. He has never looked back, although he is frequently to be found darkening the doors along the stretch of the Côte d'Or. His wines combine the mineral precision and grace of Burgundy with the flair of the West Coast.