A triple distilled Lowland single malt matured in bourbon casks. Bourbon vanilla, coconut and zesty citrus aromas lead onto a smooth and fresh palate of vanilla cream, coconut and white peach with a crisp finish of sugared grapefruit and spice. 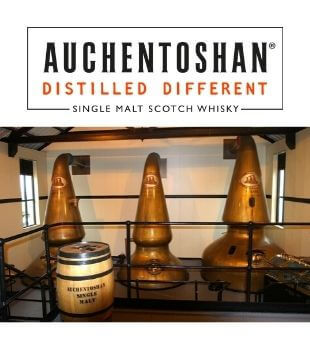 Auchentoshan Distillery was established in 1823 in the Dunbartonshire estate of Auchentoshan by one Thorne, an engineer from Greenock, who manufactured the 'inter alia' distillery plant.

In 1878 Auchentoshan had passed into the ownership of C.H Curtis and Co Ltd. Also of Greenock and had an output of the order of 50,000 gallons a year.

1903 - Brewers, distillers and wine merchants, George and John McLachlan take over the Auchentoshan distillery site.
1948 - A German bomb raid severely damages the distillery, destroying a warehouse. Whisky production was stopped during World War II, due to the targeting of the River Clyde and its shipyards.
1960 - Acquired by J&R Tennent of Wellpark Brewery, Glasgow, which was absorbed by Charringtons in 1964 and later merged to become Bass Charrington in 1967.
1969 - Auchentoshan is sold to hospitality company Eadie Cairns, which began to sell Auchentoshan as a Single Malt through its own hotels and restaurants.
1984 - The distillery is sold to Stanley P Morrison (later Morrison Bowmore) for £325,000.
1994 - Suntory buys Morrison Bowmore.
2002 - Auchentoshan Three Wood is launched.
2013 - Auchentoshan Virgin Oak is released.
2016 - The New Malt Order is launched with the Bartender's Malt.
2019 - The New Blod Pack is launched, breaking traditional malts stereotypes and reinforcing their urban roots.