In a nutshell:
A vibrant, raisined sweet wine made with Pedro Ximenez.

The lowdown:
Made by PX specialists Ximenez-Spinola this is unusual in that this is a sweet unfortified PX from Jerez; not a sweet PX sherry. After harvest the grapes are left to dry outside in the sun for at least 3 weeks, this concentrates the flavours with 1000kg of fruit yielding just 200kg of must. Blended with less dehydrated grapes in the winery and then fermented in American oak to reach only 12% alcohol. Vibrant amber in colour with ripe grape and raisin notes on the nose. A fresh and velvety palate with flavours of dates, figs and raisins.

When to drink:
A superb sweet wine that works perfectly with dark chocolate. 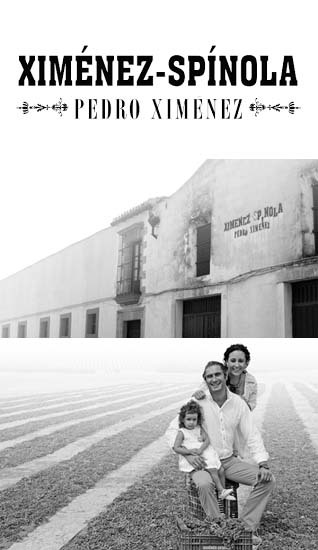 Ximénez-Spínola is a winery based in Jerez, Andalucia and founded by Philipe Antonio Zarzana Spinola in 1729. The winery is unique in that there aren't many that can claim to plant only one varietal, but that is precisely what Bodegas Ximénez-Spínola have done since their foundation. They've worked solely with the Pedro Ximénez variety (often known by its initials 'PX') to produce a selection of still wine, dessert wine, sherry and vinegar.

After nearly 3 centuries, the winery remains in the hands of the family, and they show the same dedication to the solera system as they always have, making small production expressions of sweet and dry styles of wine.

Their vineyards are located in prime locations for growing Pedro Ximénez - between the towns of Jerez, Sanlúcar de Barrameda and El Puerto de Santa María. This area is made up of chalky soils near the mouth of Guadalquivir River, which was originally flooded by lagoons and salt marshes. After the lagoons and marshland dried out, sediments and fossils that were deposited there over millions of years became the perfect soil type for vine growing. An accumulation of moisture and long hours of sunlight on the vine formulated what is known as one of the best wine regions in the world.