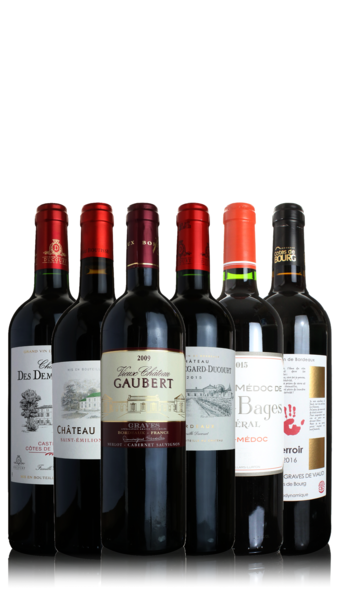 In a nutshell:
Have a vinous tour around the worlds premier wine region, Bordeaux, with our 6 bottle Explorers Case.

The lowdown:
Bordeaux is home to the worlds leading (and some of the most expensive) red wines and in our Explorers case weve taken a trip around the different parts of the region to pick out a representative selection of the different reds it has to offer.

We start with a modest, but dependably reliable petit château, Beauregard-Ducourt, which comes from the Entre-Deux-Mers area between the rivers Garonne and Dordogne. Its a subtly herby and softly spiced blend of Merlot and Cabernet Sauvignon which very versatile and welcoming.

From here we move north across the Dordogne to Castillon and Château des Desmoiselles which is a ripe and weightier blend of Merlot and Cabernet Sauvignon which has been barrel aged for 12 months prior to bottling which give it a layer of silky tannins to give the fruit flavours a good structure.

Going back to the Right Bank we visit Saint-Émilion and Château Boutisse where Merlot reins supreme. This Grand Cru wine is full of red fruits, cinnamon and cloves. Its now nicely mature but also has plenty of ageing potential.

Staying on the Right Bank on the opposite side of the river Gironde to Margaux, down stream of Saint-Émilion, in the heart of the Côtes de Bourg. Chateau Les Graves de Viaud is a biodynamic estate with their 'Terroir' cuveé a refreshing blend of Cabernet Franc with some Cab Sav and Merlot, a superb wine from the excellent 2016 vintage.

For the final wine we go back to the Left Bank and move just south of Bordeaux to the Graves appellation and Vieux Château Gaubert. This wine is now right into the best of its drinking window and has developed a real complexity and savouriness on top of the ripe dark fruits and it's quite a treat.

While theres a definite style to Bordeaux reds the different areas within also give different nuances whether they be wines for drinking young or being allowed to mature and our Explorer's Case aim to give a good look at those variations.