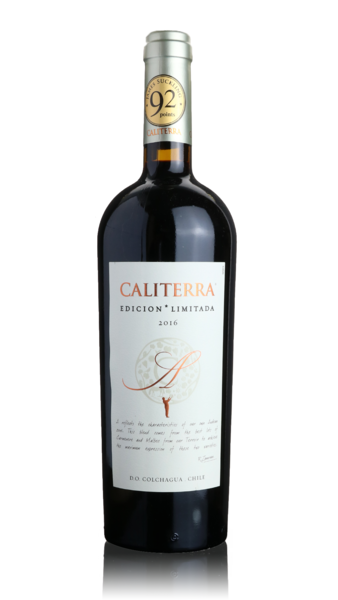 In a nutshell:
A big Chilean blend of Malbec and Carmenère with a real richness and depth.

The lowdown:
This is a wine that blends Argentina's favourite grape with that of Chile in a 60/40 proportion in favour of Malbec. After fermentation it's aged for 18 months in French oak barrels, 20% of which are new. Very elegant on the nose where hints of violets and ripe melon show through counterbalanced by characteristic Carmenère spice. On the palate there is great purity of dark fruits, touches of black pepper and sweet spice balanced by really well judged acidity resulting in a pleasingly clean finish.

When to drink:
A highly accomplished wine that rivals many more expensive offerings. Great with robust red meat dishes and goes well with cheese, both mild and and mature.

Caliterra was established in 1996 as a joint venture between the families of Robert Mondavi and Viña Errazuriz. In January 2004 Viña Errazuriz became the sole owners of Caliterra, at the heart of which is the impressive 1000ha Caliterra Estate situated in in the heart of Chile's Colchagua Valley.

The name Caliterra is taken from 'Calidad' Spanish for quality and 'Tierra' - land. The wine making philosophy of Caliterra is to produce environmentally friendly, quality wines. The focus is around the Caliterra estate in Colchagua where nearly 300 hectares are under vine. Crucially a large proportion of this estate, and all new plantings, are on prime hillside sites resulting in high quality fruit and complex wines.

Over the past few years, Caliterra has pioneered a move to sustainable wine production. The essence of this approach is sustainable viticulture, community commitment, environmental preservation and eco friendly packaging. Caliterra is certified sustainable, one of the very first Chilean wineries to achieve this accreditation.

Chief winemaker is Rodrigo Zamorano who graduated from the University of Chile with a degree in agricultural Engineering, specialising in Oenology before undertaking his National Diploma of Oenology from the 'Office International de la Vigne et du Vin' (OIV) in France. After which he returned to Chile and took up a post with the Errazuriz Group. Rodrigo has since worked his way up to the position of Chief Winemaker at Caliterra marking himself out as a young winemaker to watch.