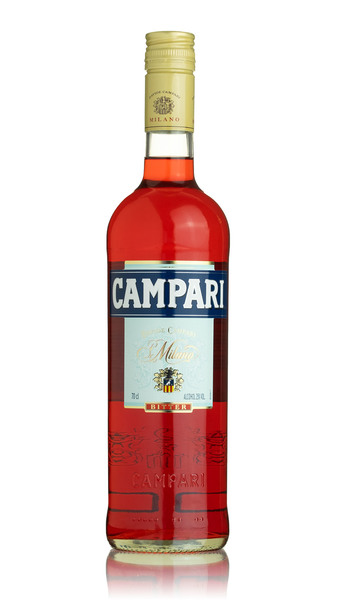 In a nutshell:
The bold, passionate and quite unique bitter, herbal Italian aperitif.

The lowdown:
Made to a recipe thats not changed since it first originated near Milan in northern Italy in 1860 Campari, the classic bitter herbal aperitif, is the base for many a famous cocktail. It's the result of an infusion of bitter herbs, aromatic plants and fruit in alcohol and water and has a trademark vibrant red colour. It's got a fresh citrussy aroma and unmistakable bitter-sweet taste. Drink it quite simply on the rocks, or mixed with 3 parts tonic over ice. And, of course, it's essential in a Negroni.

The history of Campari begins back in Novara, near Milan in Italy, in 1860, when Gaspare Campari created his distinctive bitter beverage. In 1867, Campari opened Gaspares bar in Milan's city centre and which is still there today. The business was later inherited by his sons David and Guido, who began to sell Campari to other bars and restaurants and it was only in 1904, after rapid business growth, that the first production plant was built. From there, the only way was up, and the brand grew in popularity and became truly iconic. Campari celebrated its 150th anniversary in 2010 and has become a multinational drinks conglomerate with many famous drinks brands to its name.