A glorious earthy, meaty and ripe Chianti from one of the best traditional style producers.

Vittorio Innocente is one of our favourite producers and we urge everyone to taste his wines. They won't be to everyone's liking, but you have to be glad that someone, somewhere is still making such rustic and honest wines.

Forget about fruit, this earthy Chianti has a wonderfully meaty, leathery character which makes it a superb partner for charcuterie, pate, cheese and a chunk of good bread. 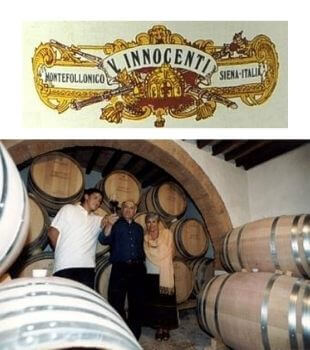 This Tuscan estate lies between Montepulciano and Montefollonico and consists of about 32 hectares of which 12 are specialised vineyards, situated between 330 and 350 metres above sea level on medium-textured clay soils of Pliocene origin. The cellar buildings, dating back to end of the 13th century, are in the small, well-preserved medieval town of Montefollonico.

The oldest document referring to the wine of Montepulciano dates back to 789: the cleric Arnipert offered the church of San Silvestro or San Salvatore in Lanciniano, on Mt. Amiata, a portion of land with vineyards on it inside the castle of Policiano. Later in his 'Historical and geographical dictionary of Tuscany'. Repetti mentioned a document dating back to 1350 in which the terms for trade and exportation of Montepulciano wine were established. Records show that since the early Middle Ages the vineyards of Mons Politianus have produced excellent wines. In the mid-16th century Sante Lancerio, cellarman of Pope Paul III Farnese, praised Montepulciano 'perfect in both winter and summer, aromatic, fleshy, never sour, nor brightly-coloured, because it is a wine fit for Noblemen' - for the tables of noblemen, although the earliest labels read simply Rosso Scelto di Montepulciano. Moving on from the Middle Ages to the 17th century, Francesco Redi, renowned doctor and naturalist but also a poet, thoroughly praised the wine in his dithyrambic ode 'Bacchus in Tuscany' (1685) in which Bacchus and Ariadne extol the finest Tuscan wines. The poem ends: Montepulciano is the king of all wines! The wine continued to be praised throughout its history and in the 19th century the success of some wineries in important mid-century competitions was balanced by the severe opinion of His British Majestys winemaker at the Vienna exhibition in 1873, when he complained that the single sample of Montepulciano present was 'mediocre enough to raise a few doubts about Redis praise'.