A polished and restrained Right Bank Grand Cru Claret from an organic estate.

Château Coutet has a long history and has long been in the hands of the David Beaulieu family who've always been at pains to cultivate their estate as naturally as possible. 60% Merlot goes into the blend which shows through with some lovely cassis and bramble notes on the nose. These flavours follow on to the palate which also has some tobacco and cedar hints giving further layers of complexity. There's a good mineral structure and the well intergrated tannins lead up to the finish which slowly fades with a pleasing dryness.

It's now ready to drink and be in top form until around 2025. Great with things like roast lamb, or feathered game. 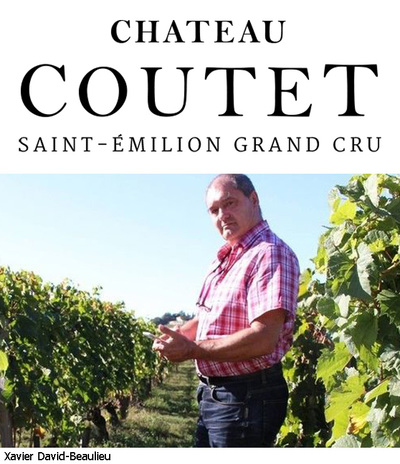 Château Coutet is situated just to the west of the town of Saint-Émilion and is within a stone's throw of some the most famous names from the appellation such as Ausone, Canon and Clos Fourtet. The history of the estate dates back to the 15th Century and it is named after Sieur François Coutet the original owner. Since the early 1600's it has been handed down generation after generation and been closely connected to the David-Beaulieu family during all that time.

The estate, which extends to 12.5 hectares, achieved organic certification in 2012. In fact neither artificial herbicides, or pesticides have ever been used on the estate demonstrating that they were among the pioneers of a sustainable and healthy approach to viticulture. The current owner is Xavier David-Beaulieu. About 60% of the vines are Merlot with about 30% Cabernet Franc with ther rest being Cabernet Sauvignon and other local varieties.