In a nutshell:
A round, ripe and juicy southern French red blend from Corbières.

The lowdown:
Corbières is towards the southern end of the Languedoc and one of major appellations of the region, especially for reds. Château La Bastide sits near the top end not too far from neighbouring Minervois. Their Tradition Rouge is made from 60% Syrah with the remainder being equal proportions Grenache and Mourvèdre. After fermentation it's aged for 12 months in stainless steel tanks. The resulting wine has lashings of dark fruits on the nose with some meaty, savoury notes and earthy spice. Nicely rich and concentrated on the palate with plenty of attractive, spicy black fruit flavours, it's very well balanced with fine, soft tannins and a lengthy finish.

When to drink:
there's plenty of wine for the money here and it's one that'll go well with richly flavoured, meaty dishes. 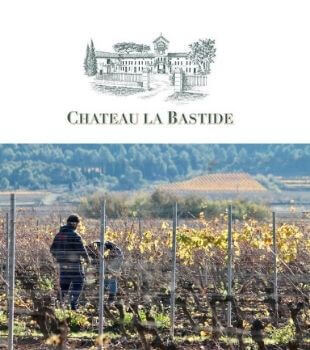 Château La Bastide is situated on the north end of the Appellation "Corbières ", in the Aude county 5km from Lézignan- Corbières. Nestled in a green setting surrounded by maritime essences, this impressive chateau which had already been mentioned in topographical layouts of 1770 and refurbished several times, offers a unique character.

Château La Bastide is ranked first in numerous tastings including USA, Canada, England, Benelux, Germany, Japan, China and other countries where 100% of the area of production is exported.

Château La Bastide has 180 Ha with 60 Ha in the "Appellation d'Origine Protégée Corbières and "Indication Géographique Protégée Aude Hauterive" area. The soil is rich with limestone  slate terraces from the quaternary period with large gravel from the alluvial origin.