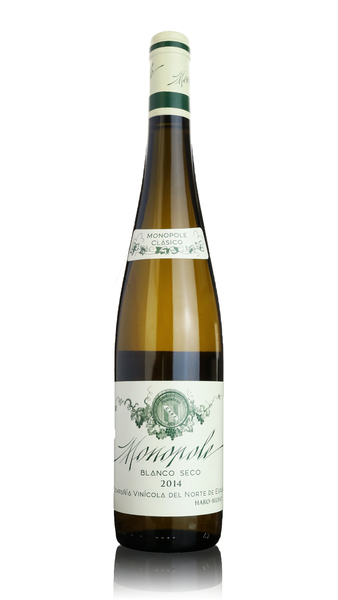 A real classic and unique white Rioja that CVNE have brought back to life.

Hand harvested grapes are softly pressed, as was done in the 1960s, and after fermentation the wine is aged in used 300l and 500l oak barrels on its lees. Part of the special uniqueness of this wine is a small addition of dry Manzanilla sherry. Complex aromas that follow through onto the palate of pear, apple, white currant, and floral hints joined by dried fruit, a nuttiness and refreshing salinity and acidity.

Pair it with fish and shellfish, grilled or roasted white meats, or salads.

CVNE (usually referred to as 'Coonay'), or to give it its full name, Compañía Vinicola del Norte de España, was established in 1879 in Haro, Rioja. It was set up by two brothers, Eusebio and Raimundo Real de Asúa who had moved to the area from Bilbao and who saw an opportunity to capitalise on the flourishing new trade in wine in this part of Spain.

They are still based in the town of Haro, in the heart of the Rioja wine region, where their bodega sits close to the railway station alongside where some of the other old wineries of Rioja Alta established themselves in order to benefit from the ease of transport via rail to the port of Bilbao, the most efficient form of transport in the late 1800s and early 1900s.

In addition the their winery in Haro they also own, or control two other Rioja bodegas, Vinedos del Contino and Viña Real, alongside Virgen del Galir in Valdeorras and Roger Goulart in Catalonia. The scale of their operations can be appreciated by the fact that they control over 400 hectares of vines in Rioja Alta.