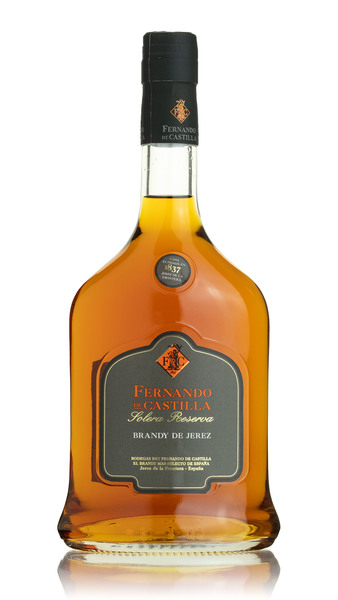 In a nutshell:
Solera Reserva brandy produced in the Jerez region of Andalusia, Spain.

The lowdown:
This quintessential Spanish style of brandy spends around five years being aged in old Oloroso and Amontillado sherry casks. While it has the unmistakable full, richness of southern Spanish brandies it's accumulated age has given it some real elegance of flavour and welcoming softness of character.

An excellent after dinner digestif. 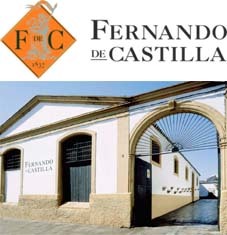 Bodegas Rey Fernando de Castilla is located in the historic centre of Jerez. Its story began with the aristocratic Andrada-Vanderwilde family, who for two centuries provided grapes and wine for the production of sherry in the area.

In 1972 Fernando Andrada-Vanderwilde took over some old sherry cellars and brandy soleras from a couple of local bodegas, and changed the name of the company from Fernando III to Fernando de Castilla. In 1999 Jan Pettersen, a Norwegian with 15 years experience at Osborne, bought the company and also acquired a neighbouring almacenista, José Bustamente. He also formed a partnership with a local grape grower - to ensure consistent supply of high quality grapes - unusual for the smaller bodegas, who usually have to rely on co-operatives. He decided to focus entirely on high-end, complex sherries - in the process upgrading the bodega to one of the most interesting and highly regarded of the small independent sherry houses in Jerez.

Whilst the company also produces Sherry Vinegar, and their own range of brandies, the Sherries produced here are amongst the finest in Jerez - from the pale, dry and elegant fino to the most unique antique wines. There are two ranges: Classic, and the premium Antique range. It is the excellence of the Antique range of intensely pure and complex single solera Sherries that has largely driven Fernando de Castilla's reputation as masters in the production and ageing of fine, unblended, untreated Sherries.