In a nutshell:
A great little Rioja Crianza that's had 12 months in barrel giving it a nice roundness and some light oaky spices.

The lowdown:
Fermentation in stainless steel is followed by 18 months in French and American oak and then 6 months in bottle before release - which is what's required of a Crianza. This gives it the touches of spice and mellow tannins that balance the bright, fresh red fruits and blueberry flavours perfectly. The blend of grapes is mostly Tempranillo with some Garnacha and a little Mazuelo.

When to drink:
It's easy going, medium bodied and perfect with chargrilled meat, cured ham or tapas. 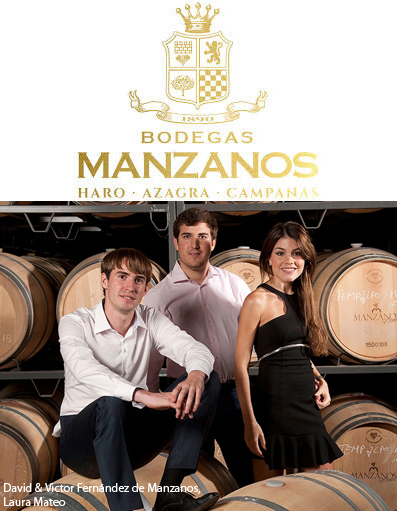 On the border between Rioja and Navarre, Victor Fernádez de Manzanos carries on the work of the four generations before him. Adding in significant amounts of ambition and energy, he is at the forefront of the new Rioja championing a modern interpretation of its varieties through his wines. Since 2010 the business has been run by Victor, his wife Laura and his brother David. Between them they've transformed the company, bringing it squarely into the 21st century while retaining all the best apsects built up by the earlier generations.

As a grower, Victor is keen to prove that Rioja Baja has its own distinct character and should not be judged as inferior to Rioja Alta or Alavesa - just different. With over 250ha of owned vineyards at his disposal, including what he claims to be the oldest Graciano vines in the world, Victor and the team at Manzanos are fortunately placed to put both the sub-region and the name Manzanos firmly on the map of the most important producers in Rioja.

The family cultivates the traditional varietals of Rioja - Tempranillo, Garnacha, Graciano, Mazuelo and Viura - and craft wines with a real sense of place and authenticity.

The vines are planted on clay-limestone soil, at an average height of 400m. The extreme climate, wet and cold winters combined with dry hot summers, offer the perfect conditions for the production of great wines.