In a nutshell:
A classically floral style of Fleurie with good intensity and concentration.

The lowdown:
Fleurie is one of the 10 Beaujolais crus from where the best wines in the region are made and which are intended to age little longer than more generic Beaujolais and this cuvée made from old vines planted in Domaine Chignard's steeply sloping, south facing Les Moriers vineyard is a prime example. The granitic soils also help give the wine a refreshing acidity. Bottled unfined and unfiletred it's full of dark fruit aromas and flavours coupled with subtle tannins, helped by the 13 months the wine spent in large oak barrels, giving it an excellent structure together with some spicy and earthy notes.

When to drink:
Altogether a very moreish wine, it's drinking wonderfully now but is capable of ageing for a few years further. 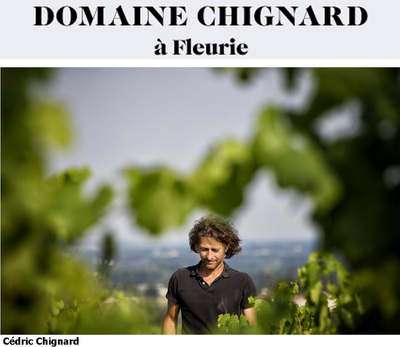 During the 1980s the skills of Michel Chignard, a fourth generation winemaker, were largely responsible for raising both the reputation of his domaine and of Beaujolias wines in general. The estate, based in the village of Fleurie, boasts some excellent vineyards sites in the area, notably Les Moriers which is on a steep slope immediately above the village.

During the early part of this century Michel's son Cédric has taken control of the domaine's operations and he has continued the work of his father who retired in 2007. Many of their vines are over 60 years old and are pruned to the traditional gobelet pattern. All harvesting is done by hand. Fermentation is done in the traditional whole-bunch style in a mixture of cement and stainless steel prior to ageing in large oak barrels.