Pinot Noir Précoce is a mutation of Pinot Noir particularly well suited to the English climate and makes aromatic and fresh wines. The fruit for this was sourced both from Flint's own Norfolk vineyards and Martin's Lane Vineyard in Essex. 2018 with its hot dry summer was an almost perfect growing season in England and yielded wonderfully ripe fruit. On the nose aromas of violets, cherry blossom and sour cherry lead onto a palate where crunchy red fruit mingles with a bit of peppery spice. With six months spent in old Burgundy barrels the tannins are gentle, soft and very well integrated.

A home grown red that's a delight to serve just slightly chilled and which goes well with cheese and charcuterie. 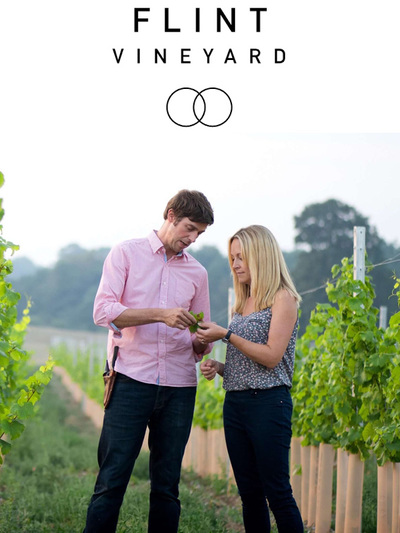 In 2007 Ben and Hannah Witchell quit their jobs to pursue their interest in wine and travelled to some of the most famous winemaking regions in the world. Upon returning to the UK, this interest, for Ben, became a desire to understand more deeply how to make wine. He moved to Sussex with Hannah and enrolled into a 3 year degree in Oenology and Viticulture at Plumpton College. This greatly influenced his approach to wine, giving him a respect for and fascination of the science of winemaking.

After graduating from college and achieving awards for 'Best research project' and 'Top winemaking student', they moved to Beaujolais, France, where Ben had secured his first winemaking post. Here, Ben learnt how to 'throw out the rule book' and experienced a more intuitive and creative side to winemaking. Hannah supported him throughout this, teaching English to young French children, and gave birth to their first daughter, Rosie. After two years it was time to return home and begin a new life making wine in England.

A chance email was sent to local farmer and entrepreneur, Adrian Hipwell, enquiring if he might know of any small plots of land for sale in south Norfolk or Suffolk. This area was of interest due to it being one of the driest and sunniest regions of the UK. Ben knew that there were pockets of suitable soil for a vineyard in that area but didn't know that Adrian currently farmed one of them. A meeting over the Christmas holidays ensued and immediately the potential was clear. Detailed site analysis followed to confirm initial hopes that the plot was suitable for grapevines and then Flint Vineyard in the sunny and sheltered Waveney Valley in south Norfolk was born.