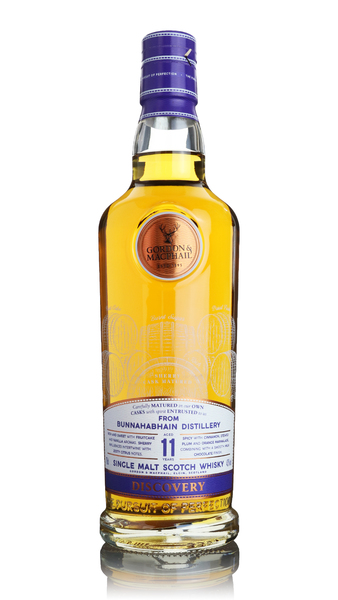 In a nutshell:
A smooth and creamy, sherry cask aged Islay single malt.

The lowdown:
Rather unusually for an Islay single malt this expression is led by the sherry cask influence rather than the smokiness more often found from the whiskies from this part of the world. It's deliciously smooth and creamy and the warming cinnamon spice merges into flavours of chewy dates with walnut hints. The finish is sleeka and silky with a milk chocolate creaminess lying over the lingering dried fruit hints.

Gordon & Macphail are among the best known independent bottlers of Scotch Whisky and certainly very well regarded for the quality of their products. Independent bottlers are companies who purchase casks of whisky directly from distilleries and further age and bottle them under their own label for re-sale. Now quite a long standing practice in the Scotch Whisky industry it provides an interesting niche market and often brings to the market single malts from distilleries whose Scotches mainly go towards blends and are seldom otherwise seen.

Founded in 1881 near Port Askaig on the island of Islay. The products of this distillery have a reputation as among the mildest of Islay single malts.

Throughout its history it has seen periods of closure and re-opening and currently produces around 2.5 million litres a year under the present owners Burn Stewart Distilleries, themselves a part of the South African Distiller Group.