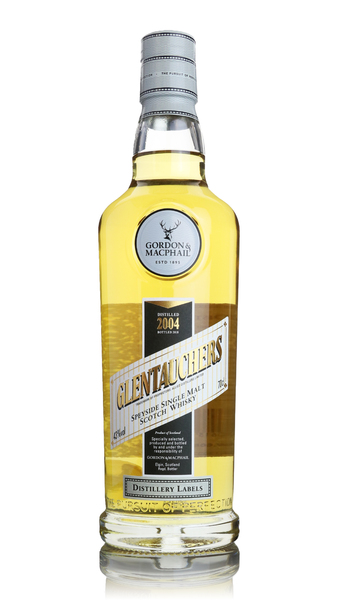 In a nutshell:
2004 distilled single malt from Glentauchers

This is an independent bottling from Gordon & Macphail who have built up longstanding relationships with many distilleries and mature new-make spirit in their own way in their own casks to make interesting single malt expressions. Distilled in 2004 and bottled in 2018 this fruity and creamy expression has dry grassy and beeswax aromas with a white chocolate, vanilla and pear sweetness that evolves over time. The tropical fruits on the palate have mixed with developing warming pepper notes and a dry cocoa powder edge meaning that there's a whole host of stuff going on.

A rare chance to get a flavour of this little seen, but good quality distillery's range.

Gordon & Macphail are among the best known independent bottlers of Scotch Whisky and certainly very well regarded for the quality of their products. Independent bottlers are companies who purchase casks of whisky directly from distilleries and further age and bottle them under their own label for re-sale. Now quite a long standing practice in the Scotch Whisky industry it provides an interesting niche market and often brings to the market single malts from distilleries whose Scotches mainly go towards blends and are seldom otherwise seen.

Founded in 1897 this Speyside distillery was built at Taucher's Farm just west of the town of Keith by James Buchanan & Co. And for many years its output went towards Buchanan's well known Black & White blended whiskies. In the early 1980s, during a slump in demand for Scotch it went out of production before being purhased by Allied Distillers who have since used it as a component of one of their main blends, Ballantine's.

These days most of the production continues to go towards blended Scotches and single malts releases are rarely seen and, when that are, usually come from independent bottlers. Whiskies from here are characterised by a floral quality rather than earty weight which is a result of the long ferments and slow distillations that are preferred here.