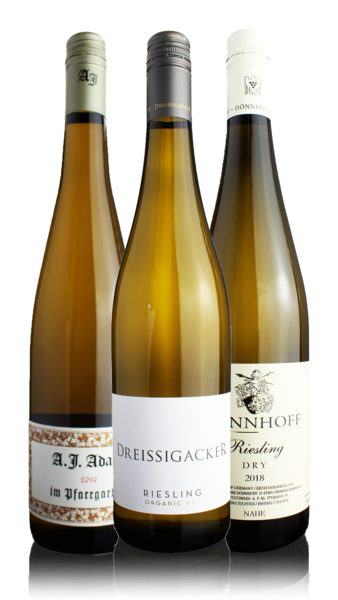 The lowdown:
Riesling is regarded as one of the most noble of grapes producing some of the world's greatest, and often, most underappreciated wines. Loved by sommeliers and wine geeks the world over, but perhaps less so by the British wine buying public. Get past the sometimes complicated and illegible labels, regions, and classes of different wines and you are in for a treat. Here we have put together a Snapshot Case of three German Rieslings by three great producers from three different regions: the Nahe, Rheinhessen, and most famous of them all the Mosel.

The Mosel Valley is the farthest west of the three and also stretches further south and north than the other two. A.J. Adam are a very small producer based bang in the centre where the Dhron tributory enters the Mosel. They are perfectionists of the feinherb style of Riesling which is a careful balance between a little sweetness and precision acidity. Moving east we enter the Nahe which produces some of Germany's best dry Rieslings and Donnhoff are rightly regarded as one of the best producers in this region. There is a roundness to the wines and they are just incredibly elegant. The Rheinhessen is bordered by the Nahe to the west and the river Rhine to its north and east and is now full of progressive wineries. Jochen Dreissigacker took over the running of the estate from his parents a few years ago and the wines have gone from strength to strength. Certified organic and now practicing biodynamic the wines are dry, ripe and full of fruit.