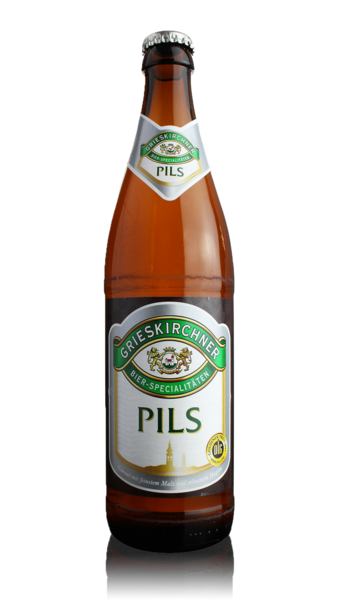 In a nutshell:
Classic hoppy and clean tasting Austrian Pilsner from Brauerei Grieskirchner.

The lowdown:
For centuries there have been breweries in the Austrian town of Grieskirchen and the Grieskirchner brewery can trace its origins back over a 100 years as well as producing Austria's first Pilsner beer in the 1950s. The Pils is their flagship beer brewed to old recipes and made with the best quality ingredients resulting in a fine and hoppy, clean lager.

Brewing has been one of the main activities in the small Austrian town of Grieskirchen, about 30km west of Linz, for centuries. In the early twentieth century the brewery became a cooperative being owned by a group of 122 innkeepers before going into private ownership from the early 1940s. While they brew a wide range of different beers they're probably best known for their hoppy Pils lager.

By The Horns West End Pils