In a nutshell this is a very easily drinkable Merlot that's bursting with luscious fruit flavours to which the soft tannins give a well judged balance. It spent just a couple of months ageing in new French oak which has given it just a hint of toasty and vanilla flavours that add a touch of complexity.

The plump, fruit forward style helps it go well with a wide range of dishes; pasta, spicy rice recipes or rich casseroles being among the some of the things that spring to mind. 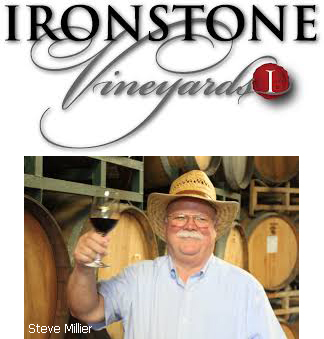 Ironstone Vineyards is today a sizable and well respected Californian estate with around 2,000 hectares of vineyards.The estate was founded back in the 1960s in what was the Californian Gold Rush Country by John Kautz as a diversification of the family's crop growing business.

By the 1980s at which time they were among the biggest grape growers in the state they took the next step and built their own winery and the Ironstone label was established. Today they're firmly established as a well established family estate. John Kautz and his wife Gail still lead the business while the next generation in the shape of Stephen, Kurt, Joan and Jack are all fully hands on in the operation and its continued development. Steve Millier, who graduated with a BSc in Enology from California State University, Fresno in 1975 is head of winemaking. He's been involved with Ironstone since 1989 and is also a director of the California Wine Institute