A bright and exhilarating North Island Pinot Noir made from fruit grown in the Auckland region.

2018 was a good vintage for Pinot Noir in Kumeu, just to the west of Auckland, and has helped produce a wine with intense red fruit aromas and flavours, a crisp palate and fine tannins. Hand harvested grapes, judicious use of oak barrels have led to a wine with pure flavours which is silky smooth in the mouth.

Fruity, mouthfilling and nicely dry this is great value Pinot Noir which is a good match to game, beef and veal recipes. 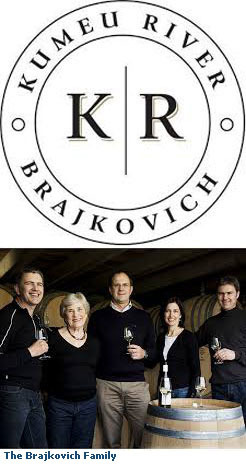 Kumeu River are one of the pioneers of the New Zealand wine industry. And in contrast to the all conquering image of Sauvignon Blanc as the country's signature grape they've built their unparalleled reputation on their world class Chardonnays.

Maté Brajkovich, a Croatian emigrant, established the estate in, what is now, the western suburbs of Auckland in 1944. His eldest son Michael, who took the reins in 1982, is largely responsible for building their name on the excellence of their Chardonnays which can be considered broadly Burgundian in style. In 1989 he was the first New Zealander to become a Master of Wine and is a pillar of the nation's wine industry. Alongside Michael his three siblings, Marijana, Milan and Paul together with their mother, Melba, all have hands on roles and if you ever drop in at their cellar door it's highly likely you'll encounter one of the family more than happy to give you the inside track on their wines.

Whilst their location, near Auckland, hasn't grown to become one of New Zealand's famous wine regions this hasn't been a brake on their development. One of their biggest challenges is that, being in close proximity to the country's biggest city property prices in the developing suburbs are increasing rapidly which makes finding suitable new vineyard sites in the area progressively more difficult. In 2017 they acquired their first vineyard out of the Auckland area in Hawkes Bay to the south and it may be that further development will be towards this part of the country.

Notwithstanding these issues they continue to actively plan for the future. Among recent successes are their Pinot Gris wines which have taken inspiration from the Alsace and more lately a sparkling wine made from a blend of Chardonnay and Pinot Noir.

Their success and world class reputation is not something that's gone to their heads. The Brajkoviches remain an understated and close knit family business with a quiet determination to make excellent and well priced wines.