In a nutshell:
An organic, fresh and vibrant Grenache/Syrah blend from Roussillon in the far south of France

The lowdown:
For the modest price this is a very skifully made wine. As typical of Roussillon reds it a blend of a selection of the permitted grape varieties here. Grenach and Syrah form the backbone, but there's also a little Mourvedre and some old vine Carignan. There is lots of juicy fruit here with plums and mulberries at first backed up by pepper and spicy minerally notes. It's got a good weight and silky tannins which give a nice balance and it's packed with lovely freshness of flavour and finishes with a touch of savouriness.

When to drink:
Its spicy notes make it a really good barbecue wine and one that will also go with a range of other spicy grilled meat recipes. 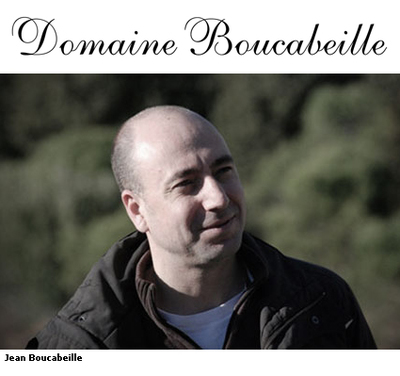 Jean Boucabeille's estate is perched on the schist slopes of the Forca Real hill, approximately 20 kms west of Perpignan. The self-contained vineyard amounts to eleven hectares laid out in hundred metre terraces. Orientation is south easterly, giving the vines protection from the fierce evening sun and allowing direct access to the cool breezes coming off the Mediterranean. Holdings comprise Syrah, Grenache and Mouvedre, alongside Grenache Blanc, Rousanne and Macabeo. Everything is grown organically, and certified so, with a huge emphasis on the healthy state of the vineyard and surrounding countryside (there are over 100 beehives on the estate). The entire crop is worked and harvested by hand, and fermentations are allowed to happen naturally, and without recourse to cultured yeasts.

The estate has historical importance, however it's current guise, in Jeans own words, was borne out of a hair brained gamble: to replant vines on the very hillside where for centuries the best wines in the region originated Representing too much work for too little pay off, the steep schist soils of the Forca Real had been abandoned during the early 20th Century. Replanting eventually took place in 1970, the vines today having reached excellent maturity at 30+ years old. Winemaking involves concrete vats for the entry level wines, and judicious use of oak for the more serious cuvees. Extraction is kept to a gentle level.