In a nutshell:
A ripe and rounded white Rioja fermented in oak barrels.

The lowdown:
After 17 days fermentation in barrel it's then aged for a further three and a half months, on its lees, in new French and American oak. This lends generous creamy and vanilla notes to the ripe stone fruit, red apple and lemon fruit flavours. It's a rich, full style with a well balanced acidity that leaves a nicely clean finish.

When to drink:
Try with seafood, rissotos, or mild cheeses. 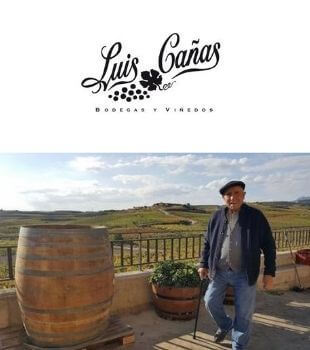 From their winery in Villabeuna Luis Cañas, in 1970, changed two hundred years of tradition and became the first winemaker in Rioja Alavesa to bottle his young wine rather than sell it as bulk. This bold move, and his continued pioneering spirit, has cemented the winery's enviable reputation as one of the most progressive in the region.

Sheltered below the watchful Sierra Cantabria, the vineyards are all old, small plots on chalky-clay soils with a dedicated team of vineyard workers carrying out organic practices and a purpose built, fully equipped accommodation block was built for the entire vineyard team in 2006. In his late 80's, Luis still leads the annual harvest, standing at the head of the selection table, keen to ensure that only the best parcels of grapes are used in his wines. His son, Juan Luis Cañas is now the powerhouse behind this highly accomplished winery, but everywhere you go there is a feeling of family, and especially of the lasting legacy that Luis Cañas will leave for both his son and the Alavesa.

One of the fundamental philosophies of Luis Cañas is that the best wines can only be obtained from the best possible grapes - and this begins and ends in the vineyards.

With 350 hectares of outstanding vineyards, split across 870 different plots, the viticultural department control every aspect. Each of the plots has its own personality and is categorised and used for different wines according to its characteristics.