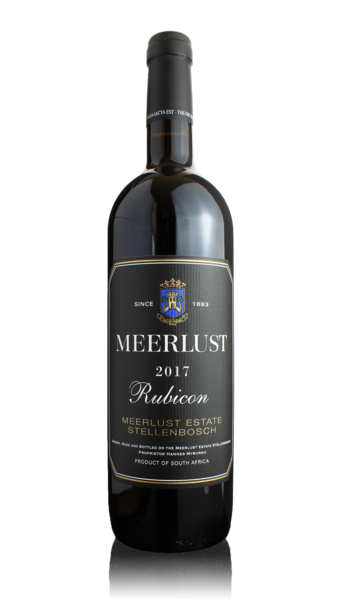 The lowdown:
With a deep, youthful colour which is intense and almost purple in hue it has the characteristic Rubicon nose with fragrant violets, ripe plum, cedarwood and intense spicinesss. It's still quite young and certainly has plenty of further maturation potential. The palate is full bodied, structured but packed with fresh dark fruit and rounded, linear tannins. As well as the Cabernet Sauvignon the addtional Merlot and Cabernet Franc provide classic ripe cassis, morello cherry, tobacco and spice flavours. Grippy tannins provide structure to this class act and the characteristic South African smokiness rounds of the smooth lengthy finish.

When to drink:
A very impressive wine that fully lives up to its revered reputation.

Long recognised for producing premium wines, Meerlust Estate has been the pride of the Myburgh family since 1756. Today, the dedication to the art of winemaking continues under the guidance of Hannes Myburgh, 8th generation custodian of this 17th Century national monument.

Meerlust were the pioneers of Bordeaux varietals in the Cape, and were the first to produce their iconic, award-winning wine, 'Rubicon' in 1980. When visiting Bordeaux, Nico Myburgh, Hannes' father discovered that the climate and soil was similar to that of the Eerste River Valley  a watershed moment. At the time, the red wines produced by the two regions, however, were very different. Unlike the Western Cape's specified cultivars, Bordeaux thrived on producing blends.

Nico returned to Meerlust, filled with inspiration and the desire to create a blend of his own that would match those produced in France. In 1980, after several years of experimentation together with winemaker Giorgio Dalla Cia, he announced the birth of the new blend. With proportions of 70% Cabernet Sauvignon, 20% Merlot and 10% Cabernet Franc, a new style of wine had been created in South Africa. The pair had crossed a new frontier, making an innovative step towards shaping the South African production of today.

Cellar master, Chris Williams has been in charge of winemaking since 2004 having previously worked as Assistant Winemaker on the estate from 1995. He studied Oenology at Elsenburg and gained international experience in France while working for Michel Rolland. His interest was aroused in the classical French wines from Bordeaux, Burgundy and the Rhone Valley.

The Myburgh family has a commitment to social responsibility and has a long history of investing in their workforce through the Meerlust Foundation, which aims to provide a safe and stimulating environment for the children of the farm workers. To further this, the Myburgh Family Trust was established, to initiate projects that would benefit their farm workers in a meaningful and economically viable way.