In a nutshell:
A fresh and delicately perfumed, organic Sicilian red from south east of this Mediterranean island.

The lowdown:
Cantine Nicosia have been making wine in south and eastern Sicily for well over a century and successfully focus on getting the best out of the island's native grape varieties. This lively red is from their organic range and is made from 100% Frappato grown in the vineyards around Vittoria near the southern tip of the island. No added sulphites are used and to keep everything as fresh and bright as possible it's aged just in stainless steel before a further brief maturation in bottle for a couple of months before release. The result is a wine with delicate and lightly floral aromas of strawberry, redcurrant and wild berries, with hints of aromatic herbs. The palate has bright red berry characters balanced with a crisp fresh acidity giving a real vibrancy and vivacity right to the finish.

When to drink:
Bright and crunchy, this is perfect slightly chilled all by itself and great with salads and vegetable dishes. 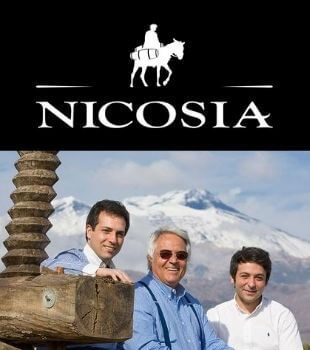 Cantine Nicosia, based in the Etna region, on the east coast of Sicily and one of Italy's most dynamic wine regions, is where Carmelo Nicosia, along with sons Franceso and Graziano, have developed their family business, started by Carmelo's great grandfather Francesco in 1898, into one of the region's most important wine producers.

Their winery in the village of Trecastagni, north of Catania, is where they marry together tradition and state-of-the-art technology. Trecastagni itself is at the foot of one of the extinguished craters dotting Mount Etna and at an altitude of around 700m, is home to the ancient vineyards of Monte Gorna, with their distinctive lava terraces. Their vineyards which have been completely restructured and replanted are located in two areas. The first being in the Etna area, on the slopes of Monte Gorna an extinct volcano to the south east of Etna where they focus on the native varieties used for Etna DOC wines: Nerello Mascalese and Nerello Cappuccio for reds and Catarratto and Carricante for whites. The extraordinary wealth of minerals found in Etna's volcanic soils can be credited with the very rich flavour and unique character of the wines produced here. Their other vineyard is just a few miles from the southernmost tip of Sicily around the lively agricultural center of Vittoria and the Contrada Bonincontro district which is home to their extensive plantings of Nero d'Avola and Frappato.