Pacherenc di Vic-Bilh is a Gascon white that is made in both dry and sweet versions - this one, as indicated by the word 'sec' is of the dry variety. It's a blend of local white grapes, Gros Manseng, Courbu and Petit Manseng from vines up to 50 years old. It's big, generous, quite golden in colour and with a nose of orchard fruits. The palate is fresh yet rich with the orchard fruits carrying through and layer of warm, soft spice.

A unique and quite mouthfilling wine from one of the area's star producers. 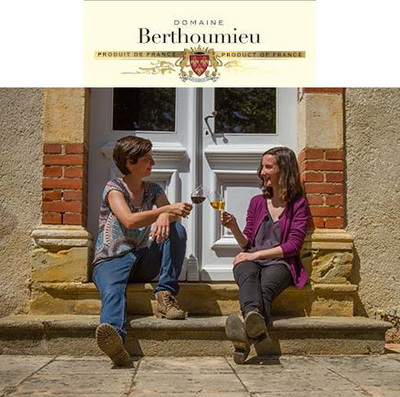 Domaine Berthoumieu is a small domaine in the Gascon village of Viella, in the north of the Madiran appellation in the heart of the south west region of France.

Since 2017 Claire and Marion Bortolussi now manage its 26 hectares in the heart of the glorious Gascony countryside on stony clay soil, watered by the rain from the Pyrennees. The wines offer tremendous character and style, genuine 'vins de terroir', and some of the best in the appellation.The domaine has two different plots: one on a pebbly clay plateau to the west of the village facing south towards the Pyrenees, and the other a gravelly slope facing south east to the east of the village. Tannat thrives here; its dark, chewy, liquorice character perfectly matching the rich, gutsy cuisine of confit d'oie and magret de canard. It is the land of the Musketeers and Charles de Batz, who was born in nearby Lupiac, was the original Comte d'Artagnan and has lent his name to Berthoumieu's premium cuvées of Madiran and sweet Pacherenc du Vic-Bilh.