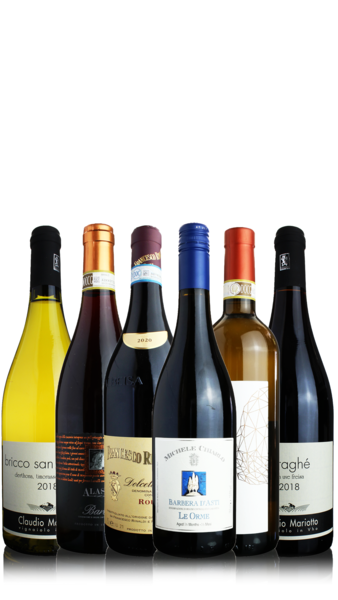 A 6 bottle Explorers Case that delves into the wonderful world of Piedmontese wines featuring 2 white wines and 4 red.

Piedmont in North-West Italy is one of the worlds great wine producing regions. From some of the most revered (and expensive) reds such as Barolo, to light and fresh Gavi there really is something for everyone. With our Explorer's Case we're going to highlight some of the classics as well as one or two ancient rarities! Starting with the whites we have to have a Gavi and our La Fornace comes from the commune of Tassarolo, north of the town of Gavi itself, and is made by the small family producer Cinzia Bergaglio. Head further north again and we hit the ancient settlement of Tortona where our second white hails from. Timorasso is a rare and very old variety producing some extraordinary wines with a richness and lots of stone fruit and citrus notes with touches of spice. Definitely deserving of a bit more attention!

We are currently 40 miles or so due north of Genoa but before we head west past Alessandra to the reds of Asti and Alba we stay in Tortona to showcase another old, forgotten variety, red this time. Regarded as a parent to Nebbiolo Freisa once was widely planted but now less than 1000 ha remain in Piedmont. Medium-bodied with ripe fruit, robust tannins and fresh acidity a great wine for stews, grilled meat or sausages.

Now we come to the three main reds of the region. Nebbiolo, Barbera and Dolcetto. Nebbiolo, a King of Grapes, pretty much likes some hills in Piedmont and nowhere else. This tricky grape produces some fantastic wines and our Alasia Barolo is a great first, affordable step into these wines. Barbera is the regions most widely planted red variety and while much of it produces light and juicy table wines our Barbera d'Asti 'Le Orme' by Michele Chiarlo is a bit more of a serious example with a touch of oak used to add that structure and body. Dolcetto is once again gaining a bit more popularity and while it maybe regarded as the third red of Piedmont our example from top Barolo producer Francesco Rinaldi is anything but. From a single vineyard within the Barolo area itself it is fresh, juicy and very well put together.

So learn and discover about the varied and enticing wines of Piedmont with out 6 bottle Explorers Case.