In a nutshell:
An attractively pale, fresh, crisp and clean southern French rosé.

The lowdown:
The grape used here is Picpoul Noir and is the dark-skinned sibling of the white grape used in the popular Picpoul de Pinet. Indeed you'll be able to pick out some of the similarities in character. With a very pale pink colour it has delicate aromas of crushed rose petals with lemony notes that follow through onto the crisp and dry palate with great fresh strawberry and cranberry red fruit flavours.

When to drink:
An excellent alternative to a classic Provençal rosé it's quite simply a lovely wine to drink by itself, or to partner with shellfish and summer salads. 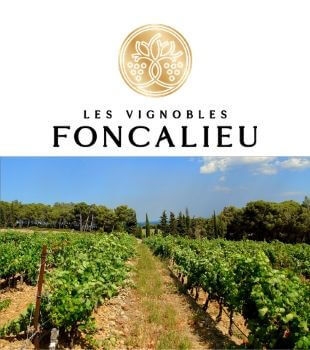 With an estate that stretches to more than 4,000 hectares of vines Les Vignobles Foncalieu are among the largest producers in the Languedoc region of southern France. They are a cooperative, established in 1967, with their headquarters in the town of Arzens to the west of the ancient city of Carcasonne. They currently have around 650 growers in locations stretching from the Corbières massif near the Pyrenees through to the plains around Canal du Midi and on up to coastal areas around Beziers.

One of their strengths is the support they give their growers, particularly their agronomists and oenologists who help to ensure the maximum potential is realised from each terroir. The consistent quality of their extensive range which encompasses several of the area's appellations is a fitting testament to their approach.