A reliably rich and complex southern Burgundy white from a highly regarded producer.

Following in the same vein as the two previous years 2017 produced rich and ripe whites across Burgundy and this Pouilly-Fuissé from Saumaize-Michelin shows that in spades. There's plenty of ripe fruit on the nose which mingles with citrus and a hint of tropical flavours. The deliciously creamy texture and well balanced acidity lead up to a gloriously lingering finish which stays longon the tongue.

A wine that delivers really well for a modest price tag. Perfect with poached salmon and hollandaise. 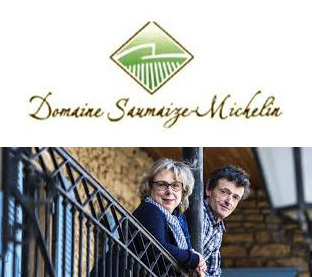 Situated in the small village of Vergisson which sits in the shadow of the spectacular Roche de Vergisson Roger Saumaize and Christine Michelin have been farming their small domaine here since 1978. They have just 10 hectares of vines in four villages surrounding Vergisson and make several different whites with the appellations Pouilly-Fuissé, Saint-Véran, Mâcon Vergisson and Mâcon-Villages.

Both are dedicated to the health of their soil and vines and to producing wines which fully express the terroir of their favoured part of the Mâconnais region. They've been practising organic viticulture for more than twenty years and following biodynamic principles since 2005. In the winery they're very fastidious and keen to ensure their wines always show at their very best. Given the favourable comment they get from pretty much all corners the result sof their efforts speak for themselves.