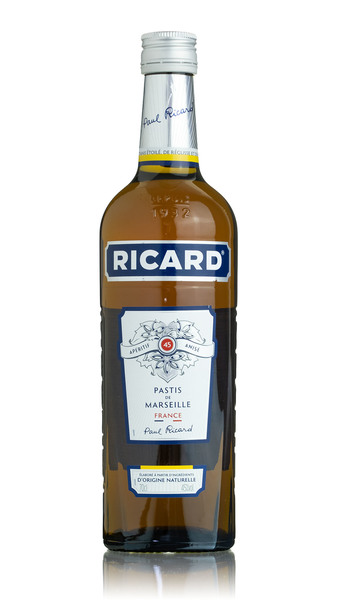 In a nutshell:
The classic French Pastis characterised by bold liquorice and aniseed flavours that hails from Marseille.

The lowdown:
Pastis is the quintessentially southern French aperitif and Ricard is the most popular brand in its home country. The key ingredients providing the unmistakable flavours are star-anise and liquorice along a range of Provençal herbs. With its characteristic pale yellow colour there's pungent aniseed on the nose balanced by the earthy sweetness of the liquorice while the finish is herbal and a touch bitter-sweet. Serve it 5 parts chilled water to 1 part pastis in a tall glass just like they do in Marseille.

Pastis Ricard was created in Marseilles in 1932 by one Paul Ricard who, still in his early twenties, came up with the formulation for a new aniseed based aperitif. Massively popular in its home country of France it's relatively rarely seen on our shores. In the 1970 the Paul Ricard's company merged with Pernod, one of France's other famous anise spirits to from the Pernod Ricard group which is now a global drinks conglomerate.