In a nutshell:
A lavishly rich and creamy old vine Chenin Blanc from the Stellenbosch region of South Africa.

The lowdown:
Chenin Blanc is South Africa's most popular white grape, but few take quite as much trouble in making a superior version than Stellenrust. Hand harvested fruit from 53 year old vineyards is wild fermented and aged on its lees in French oak for nine months - not dissimilar to good white Burgundy. It has ripe and tropical honeyed fruit flavours and a smooth creaminess coming from the oak. To round off the lingering finish remains bright and crisp throughout.

When to drink:
A wine that's won many awards and is very well worth the pretty modest price tag. 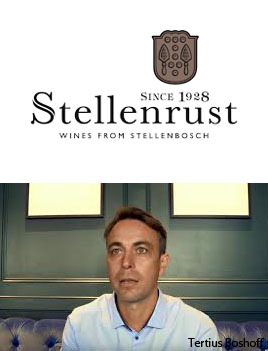 Stellenrust bottled their first wine on the farm in 1928. Today the farm, situated a little to the south of Stellenbosch comprises around 400ha (200ha planted), half of which stretches over the Golden Triangle area of Stellenbosch, and the other half is situated high up in the Bottelary Hills, renowned for its cool climate and late afternoon sea breezes swooping in from Cape Town.

The farm is run by Tertius Boshoff the winemaker and his brother Kobus, the farm's viticulturist, who are committed to following their father's dream: to give something back to the workers who have themselves given so much to the farm. As a Fairtrade producer they boast one of the most successful Black Economic Empowerment projects in South Africa. This has resulted in 70 employees taking ownership of the land they farm. Tertius says: "These are the men and women we grew up with, we played together when we were young and now we work together towards the same dream and goal."