In a nutshell:
A fascinating organic and quite easy drinking Priorat fom Catalonia.

The lowdown:
While now a region famed for its premium wines, things used to be quite a bit simpler when most wines came from the local co-op and were made for immediate consumption. This cuvée, made with all the modern care and attention to quality, is aimed to recreate some of the character of the earlier days. Made from mostly Garnacha with the remaining quarter being Cariñena the fruit is sourced from vineyards in nine of the historic Priorat villages. The fruit is put in cement tanks, gently crushed and then essentially left to ferment with as little interference as possible. The result is a smooth and easy to drink wine with some really interesting tropical fruit overtones. Above all it's fabulously easy going and food friendly.

When to drink:
Open it an hour or two before drinking to catch it at its best. It's brilliant with tapa, tomato based pasta dishes and even spicy Indian and Asian cuisine. 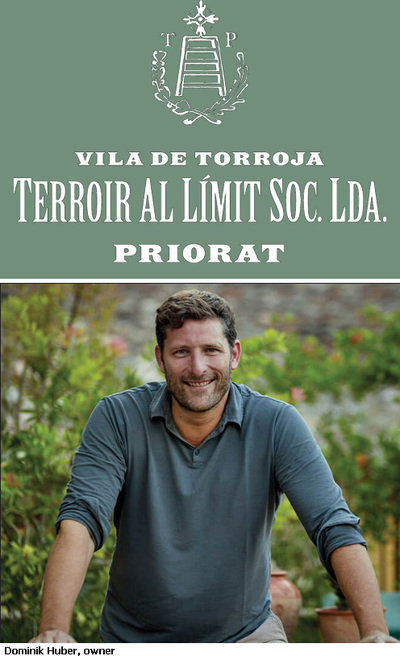 In 2001 a food and wine obsessed German named Dominik Huber, and winemaker Eben Sadie fell in love with Priorat. With the help of some friends they found a plot of old vine Garnacha and Carignan, and rented some cellar space to make their first vintage of Dits del Terroir. They're now based in the heart of the region at Torroja del Priorat where their winery is the former village co-operative .

As the project grew, and they took on more vineyard sites, Dominik dedicated more time to farming, implementing biodynamics and other methods to reduce the stress on vines in this stark and difficult terrain. This new approach paid off, directly impacting the quality of the fruit. However, with better fruit coming into the cellar, they realised that super-ripe grapes, combined with extractive winemaking, and ageing in barriques was masking the essence of the vineyards they were working. So to counterbalance this they started to practice whole bunch fermentation and out went the small barrels, replaced with concrete tanks and large oak.

Dominik now bottles in the Burgundian model: wines are classified as crus, village wines (Vi de Vila), or regional wines such as the Terroir Historic red and white, where grapes are sourced from trusted growers across the Priorat. The resulting lithe and elegant, pure and expressive wines have gone from strength to strength, and fully deserve the reputation and cult-status they've since acquired. Eben has since departed to dedicate more time to his projects in South Africa, but Dominik remains as the soul of the project.