The lowdown:
A blend of Sam Neill's four Central Otago Pinot Noir vineyards this wine is the flagship of the Two Paddocks estate, an organically grown barrel selection. Most of the work in the vineyards is done by hand and the wine is made using traditional methods including 25% whole bunch, which adds wonderful bright fruit flavours and a vibrancy to the wine. The wine is matured in a mix of old and new French oak. A forward and rich wine with blackcurrant, red plum and spicy aromatics. A dense and persistent textured mouthfeel but balanced with good acidity.

When to drink:
One of those wines you can happily drink just on its own. Great with white meat or slightly chilled in summer to have with lunch. 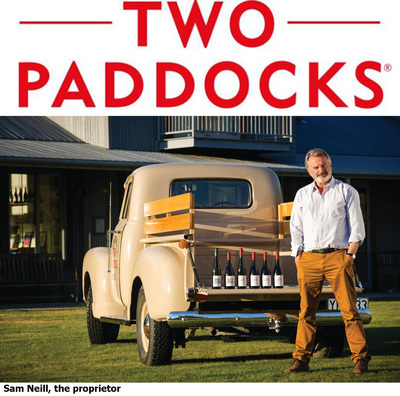 Two Paddocks is actor Sam Neill's small family wine producing business that is entirely dedicated to making great wine. He started out in 1993 with modest ambitions and first planted five acres of Pinot Noir at the original vineyard at Gibbston, Central Otago in the deep south of New Zealand. At the same time, friend, neighbour and film director, Roger Donaldson planted the land next door, which led to the name Two Paddocks. 1997 saw their first vintage which was pretty good and only couple of years later they were producing a Pinot Noir they reckoned was world class. That led them to becoming outrageously ambitious and now their aim is to produce year after year, the world's best pinot noir. Over the years theyve expanded to take on three other small vineyards, superbly sited in the Alexandra and Bannockburn districts of Central Otago. This puts them in the unique position of being the only Central Otago winery with a footprint in all three of Central Otago's great valleys, by owning vineyards in Gibbston, the Alexandra Basin and now the Cromwell Basin. they believe it demonstrates their faith and confidence in the future of New Zealand wine, Central Otago and in particular, Central Otago Pinot Noir.