In a nutshell:
A full and fruity southern Italian rosato.

The lowdown:
Made mainly from Primitivo grapes grown in the Salento peninsula. On arrival at the winery the grapes are crushed and immediatley pressed keeping skin contact time down to a matter of second to achieve the desired colour and preserve the fresh fruit flavours. The result is a wine bright pink in colour with a lively, youthful perfume of ripe strawberries and a touch of fresh mint. On the palate, it is surprisingly full-bodied with good structure.

When to drink:
Perfectly balanced with a delicate fruit character and zesty, lightly spiced finish. 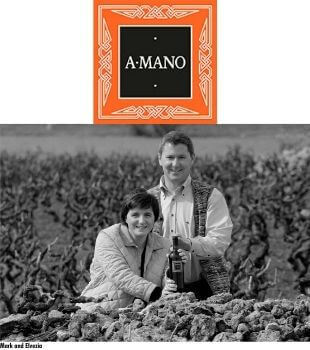 Californian Mark Shannon and his partner Elvezia Sbalchiero originally from northern Italy fell in love with the Primitivo grape found in the Puglian heel of Italy in the late 1990s and subsequently set about making their mark using what was, at the time, a somewhat neglected variety. They've since succeeded in making Primitivo one of Italy's most talked about grape varieties. They are based in the ancient Puglian town of Noci.

They don't have extensive vineyards of their own but by focussing solely on quality, a modern winemaking style and by being prepared to pay top prices for the best old vine grapes, they have revolutionised the style and quality of Primitivo. Part of the reason for the continued success of A Mano is the knowledge that Mark and Elvezia have after 18 vintages (the first was as a consultant for another company) in the region. Not only are they getting access to the region's best grapes, but also their growers have come to realise that if they want the higher price paid by A Mano, they need to provide even better grapes than in previous years. The quality of the grapes shines through in the resulting wines.