This week’s episode takes us to the North East of Italy.

The full episode is available to watch below. 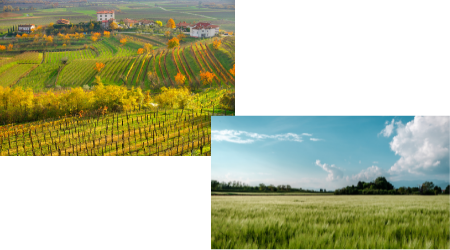 Most of the regions in the North East and North West back onto the Alps, with some regions, such as Friuli Venezia Giulia, producing distinctly cool climate, even alpine in style wines. Most of the vineyards here are in the foothills and around lakes; large bodies of water have the ‘lake effect’ which helps to ward off frost and moderates the hotter summer temperatures.

Friuli is where some of Italy’s best light and aromatic wines are made. These wines are mostly Whites made from local grapes such as Pinot Grigio, Pinot Blanco, and Friulano. Additionally, you will find Riobolla Gialla, a delicate variety that needs it yields kept in check to show its best, Verduzzo, Picolit and some Sauvignon Blanc. Moving to Reds, Refosco is starting to emerge from obscurity and we are seeing some great examples of it. Schioppetino and Pignolo are rarer varieties but good examples can be found.

Most of the wines here are highly sought after; production is more quality than quantity focused so production is not big in volumes. The best DOC’s here are Colli, Friuli Colli Orientali and Friuli Isonzo and there is a DOCG for Friuli Colli Orientali -Picolit. Picolit is considered one of the great grapes of Italy, however its wines are scarce due to the problematic variety. 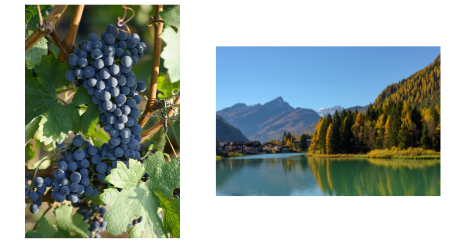 Moving to Trentino Alto Adige where we are heading into alpine and distinctly Germanic territory. Many of the towns here have both Italian and German names, with many of the wineries sounding more German than Italian. The town of Termeno is where Tramin (also known as Gewurztraminer) originated, before migrating north to Alsace, but some good examples can still be found here. Alto Adige, otherwise known as South Tyrol or Sudtirol in German, has the potential to rival Friuli for its aromatic whites.

There are a few local grapes of interest in Trentino, mostly permitted under the generic Trentino DOC label. The most important emerging grape here is Lagrein; whilst this can be a little tannic it is capable of producing superb red and rose. Lagrein is related to both Syrah and Pinot Noir, carrying characteristics of both. Unfortunately, only 1000 acres are planted and most does not make its way out of Italy. 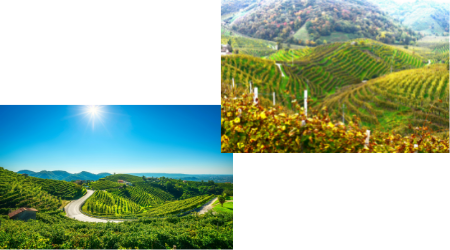 Veneto is the powerhouse of the region in terms of production. If it were listed as its own country, it would be sixth ahead of Argentia and only just behind Australia. Quality, however, is more problematic. Vast amounts of the main DOC wines are produced here: Valpolicella and Bardolino for Red, Soave for white and Prosecco. Superb wine can be found from the right producer, but there is little other than knowing your producer and the price point to indicate whether it will be good, bad or indifferent. Garganega is the mainstay for Whites and the bulk of Soave, but Chardonnay and Trebbiano di Soave (better known as Verdicchio) are also permitted.

Four grapes dominate both Valpolicella and its lighter lakeside cousin Bardolino when it comes to reds. First, Corvina unquestionably has the best quality overall but is almost never seen alone as it needs to be blended due to a lack of tannins and it does not usually reach high enough sugar levels. The other three main grapes – Corvinone, Rondinella and Molinara – help to make up the blend with higher tannins, fruit and acidity in differing values.

Veneto’s main areas and styles are based on these grapes and a winemaking technique that is practised here known as Appassimento. This is the process of partially drying grapes, either in the sun or on straw mats. This removed the water, so the remaining sugar, flavours, tannins and acidity are more concentrated such that the resulting wine has more flavour and alcohol, as well as tannins, acidity and generally more complexity. Appasimento was originally a Roman technique for concentrating wines, re-discovered and refined in Veneto.

We can’t leave Veneto, without mentioning Prosecco. The grape is Glera, called Prosecco within the DOC and DOCG areas but you can see ‘Italian Sparkling Wine’ with Glera somewhere on the label, which are generally cheaper alternatives to Prosecco. The DOC is centred around the heartland of Conelgiano Valboddiadene DOCG, and this is really the one to try. Not much needs to be said about Prosecco’s popularity; it is a great aperitif and after the recent expansion, now producers around 500 million bottles a year. To put this into perspective, the more established Champagne produces around 300 million whilst our own fledging sparkling production here in England producers around 7 million.

Hopefully, you have learnt something new about wine production in North-East Italy. Join us next time as we head to the North-West, visiting Piedmonte and its surrounding areas.